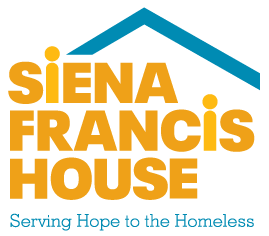 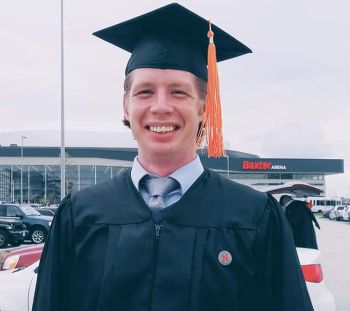 Like many other graduates this spring, Nathan Wood walked across the stage at Baxter Arena on May 3, 2019 and received a diploma. But what sets Nathan apart from his classmates is a different graduation ceremony that occurred over five years ago, when he completed Siena Francis House Miracles Addiction Recovery Program. Once homeless, addicted and hopeless, Nathan is now a sober college graduate, working and thriving in the Omaha community.

When Nathan first arrived at the Siena Francis House in October 2012, his life was so out of control due to addiction that his only wish was to fall asleep at night and NOT wake up the following morning. As a homeless guest in our men's shelter for eight months, Nathan kept hearing about our organization's Miracles Addiction Recovery Program. He observed men in that program serving our homeless guests, going to recovery meetings, making good life decisions and, above all, being happy. In July of 2013, Nathan became "sick and tired of being sick and tired" and submitted this application to enter the recovery program. "That was the best decision I have ever made in my entire life," Nathan said.

Siena Francis House recently caught up with Nathan and asked him to share a little of his own personal story, including how our programs helped him turn his life around. These programs would not be possible without your support. As you learn more about Nathan's story in the following paragraphs, we hope you understand the impact your support of our organization has on so many people like him.

Q: Can you tell us a little about your childhood?

A: I'm the eldest of 5. We were always very poor. My father took his life when I was 10-months-old and that left my mother broken. He suffered from addiction, as I do. She tried to move on and remarried several times, but she was deeply injured. The men she  chose to be with only injured her more. My childhood was painful. I carried a lot of responsibility as the eldest, but also suffered more of the abuse. For some reason or another, we always moved just shy of a year, and I didn't complete a full year in school until my sophomore year in high school, when I moved out. I wish I could paint a prettier picture of my past, but that's just how it was.

Q: What is/are you addiction(s) and how did it/they start?

A: I was always an awkward person in my youth . . . and felt nerdy, nervous, strange. When I reached high school I felt I needed a new identity. I started living the life I had idolized in culture. I became what fifteen-year-old me thought was cool: being the rebel. I started wearing punk clothes and had the punk hair, and began to do whatever drug came along. I noticed, but didn't care, that once I started taking any substance, I couldn't stop.. Others had restraint; I did not. Eventually, years flew by and everyone began to grow up, settle down and get careers. When it came time to give up drugs, alcohol and the lifestyle, they were able to do that. I found out that I couldn't. I was an addict.

Q: How did you end up at the Siena Francis House?

A: I'm originally from Texas. At 28, I found myself jobless and living at my grandmother's in my old hometown. I was finally at full grip with the reality of my situation. A strange set of circumstances had me reconnect with my brother. He has lived in Nebraska since he was 13. I told him what was going on with me and he suggested that I come to live with him and make a new start. Eventually, in October 2012, he had to kick me out. When the police picked me up for being drunk in public, they brought me to Siena Francis House.

During that time, I had a job working construction. When my boss heard that I was homeless, he let me borrow a company truck. I slept in that truck most nights in the shelter's parking lot. Not because there wasn't a bed inside for me, but because they wouldn't let me drink inside. The drinking had become entirely overwhelming and was the sole thing on my mind. I woke up on my 30th birthday, passed out in the truck. I had fallen asleep with the door open. It was 14 degrees that morning. .I was drinking to near alcohol poisoning every night and I couldn't will myself to stop. I figured that this was the end of the road for me (and I truly hoped it would be). But because it was so cold, I decided to request a bed inside the shelter.

Q: How did you learn about the recovery program?

A: As a guest, I frequently interacted with the men in the Miracles program who helped with some duties around the shelter. I stayed there for 8 months and was able to watch these men - who were just like me - come into this program and change into something better. However, even staring the evidence in the face, I couldn't commit to the belief that I had a chance at recovery. I had tried quitting and failed may times. I believed if I couldn't get myself to quit then no one could. Like most addicts, I had a distorted view of what the disease of addiction is and I assumed, as most of the general public does, that it was a lack of willpower on my part.

Q: Why did you decide to join the recovery program?

A: Eventually, I was apprehended on a DUI and spent 3 months in jail. I made a firm resolution to quit drinking and finally turn my life around. Back at Siena Francis House, I finally asked for an application to the Miracles program, and it took three days of overthinking before I handed it in on July 25, 2013 . . . the last day I had a drink. I came in so afraid of my addiction that I decided to do whatever they told me, although I was sure I would fail.

Q: What did you learn about yourself, others and people experiencing homelessness while in the Miracles Recovery Program?

A: The Miracles program introduced me to someone I've always known and ignored: a higher power. They showed me what is really important in life and taught me how to give more than to receive. How to have empathy and love. How to finally feel connected and care. They didn't teach me how to quit drinking. I'd tried that, and it didn't work. They caught me how to live. By simply believing and living accordingly, the need for substance use disappeared from me.

Q: What have you been doing since you graduated from the Miracles Recovery Program?

A: I graduated the Miracles program in March 2014. I moved to a 3/4 way house and eventually became president there. I stayed at this home for 2 years while I pursued an associate's degree at Metropolitan Community College. I've always worked in the field of construction, so, while I was in school, I started doing a few odd jobs, here and there. With every job I had to buy a new tool, and with every job came a referral for the next one..

Eventually, I bought a truck and some business cards and started my own business: Nathan Wood Renovation & Repair. I've grown this business over the last five years, at times employing several people, as well as have taken on some really incredible projects. When I do need help, I often go to the Siena Francis House and employ some of the men there. And, I continued to go to school, full-time, at MCC. In May 2016, I was awarded an associate's degree, graduating with a 3.9 GPA. This earned me a spot at UNO's College of Engineering. In May of this year, I graduated from UNO with a Bachelor of Science degree in Civil Engineering with a focus on structural engineering (known as one of UNO's toughest programs). The renovation and remodeling business has been good to me, but it is time to close up shop and go build something bigger.

Q: What are you grateful for and what is your perspective on life, relationships, etc.?

A: Today, I have hope for my future. I finally care about life and the people in it. I have reconnected with my family and have started my own with a beautiful, wonderful, smart and kind woman that is way to good for me. I continue to avail myself to the recovery community and hope that I can spark the same change in others that the Miracles program gave to me. I cannot beat addiction; it is just part of who I am. But Siena Francis House taught me how to break that cycle, and to supplant it with a deeper meaning and purpose. Life is truly what you make of it. I just needed some direction and I got that from Siena Francis House.

Ongoing support is important to enabling projects to continue their work, so we encourage donors to continue to contribute to projects over time. But if you must cancel your recurring donation, please notify us.